The Power of Words

Understanding the importance of words when we want to transmit a message ;
Learning more about Aboriginal values through the song of N’we Jinan produced in collaboration with the youth of the Ojibwa community of Grassy Narrows. 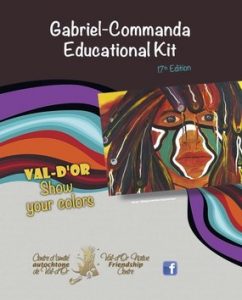 Children learn gender stereotypes very early, particularly the ones according to which boys would be better at STEM and girls at languages and arts. Yet, children with interests going against the stereotype associated with their gender identity, for example boys who like poetry and arts, can experience bullying and exclusion. A good way to break down those gender stereotypes is to propose to students inspiring role models that go against these gender stereotypes.

The Val-d’Or Native Friendship Centre has developed a series of outreach activities that can be facilitated in class for each grade of elementary and high school levels. The activity targeted at fourth-grade students, The power of words, looks at the importance of words when trying to deliver a message, using a song produced by the N’we Jinan Organization, in collaboration with the youth of the Ojibwa community of Grassy Narrows.

During the last part of the activity, i.e. the Reflective sharing and integration of learning part, discuss the following questions with students: who can become a poet or use poetry to deliver a message? Can everybody do this?

Invite students, if time permits, to write a short poem (as initially suggested by the Val-d’Or Native Friendship Center) about gender equality or equality between all human beings, girls and boys, Native and non-Native, for example.