Show students that they can embrace any career, no matter what their gender is ;
Break down gender stereotypes associated with traditionally male or female jobs ;
Give students positive role models of people from their community going against gender stereotypes. 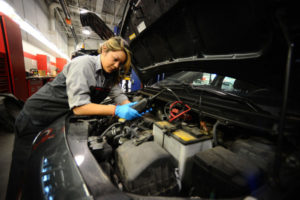 The gendered job market segregation in Gespeg’ewa’gi is strongly rooted in gender stereotypes. To help children truly picture themselves in the careers they would really to embrace without being influenced by what is traditionally expected from them according to their gender, we have to show them various models and be careful of the examples we choose when talking about careers and jobs.

Choose four jobs that are important in your community: two traditionally male and two traditionally female. Give each student four sheets with the outline of a person and ask students to draw people performing these jobs (for example, draw a “firefighter”) and to name their characters (see table for examples).

Once children have drawn and named their characters, invite people from your community that actually do these jobs, but that have a non-traditional job for their gender. Divide the group in four teams and invite these people to prepare a short activity where children can explore their job.

Don’t hesitate to contact employers or union representatives to get in contact with men and women in non-traditional fields for their gender.