Work with fathers to increase their confidence in their fathering role ;
Understand the influence of colonization on the role traditionally devolved to fathers in matters of education ;
Offer teachers some avenues of intervention to increase the value devoted to the fathering role and deconstruct the gender stereotypes associated with it, as well as masculinity. 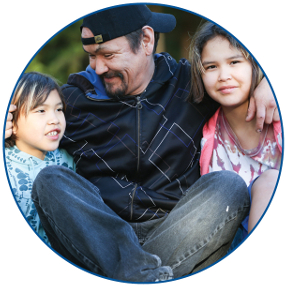 Many Indigenous fathers in Canada face challenges in maintaining connections to their children and in feeling confident in their fathering role (Ball & Daly, 2012). According to studies on the topic, “low participation of Indigenous fathers in infant and early childhood care has common across First Nations, Métis and Inuit communities and early childhood programs in Canada” (Ball, George, Manahan & Joe, 2013, p. 1). Common successful elements of outreach and support initiatives include addressing gender and especially male stereotypes (Moselle & Ball, 2013). Including fathers in culturally relevant and positive parenting programs and support initiatives could be of utmost importance in aboriginal children’s well-being (Ball, 2012).

Indigenous Fatherhood: a bit of context

Ball (2012) underscores the distinctiveness of Aboriginal families in Canada, explaining that they are unique in many ways when compared to non-Aboriginal households:

The author illustrates these effects through this figure.

The intergenerational transmission of fathering has been disrupted by the traumatic experiences of residential schools, making it more difficult for some Indigenous fathers to be positively involved with their children (Ball, 2010). The Indigenous fathers’ need for a healing process has been documented by many First Nations scholars (Ball, 2012). Therefore, Indigenous fathers involvement programs should take into account the sociohistorial context that has led to the current situation and include healing activities.

Benefits of Having Fathers and Grandfathers Involved

According to B.C. First Nations Summit Grand Chief Edward John, “fathers may be the greatest untapped resource in the lives of Aboriginal children and youth” (Ball & Manahan, 2010). There are indeed many health outcomes for children associated with father involvement, among them (Ball, 2012):

Obstacles and Barriers Preventing Fathers from Playing their Role

Aside from the obstacles mentioned earlier that relate to colonization and intergenerational trauma, there are a few obstacles and barriers that can prevent fathers from getting involved in a positive way with their children, and that need to be taken into account when crafting workshops and programs intended at them:

Best Practices and Elements of Success

Finally, if we look at the outreach and support programs themselves, here are a few common elements of success found across Canada (Moselle & Ball, 2013):

Programs and tools to inspire you when designing your own program

Jessica Ball, in collaboration with Early Childhood Development Intercultural Partnerships, has developed a Resources Kit that can be ordered by Health & Community Services, schools, or any organization interested in developing a series of workshops targeted at fathers.

This site offers a number of publications for people who are working in the area of family violence prevention for Aboriginal communities—both on- and off-reserve. Their Mi’Kmaq and Maliseet partners encourage you to use the information on this site. It may help you to create responses to family violence both in terms of crisis intervention, public education and prevention.

With Dad: Strengthening the Circle of Care

“How can we welcome fathers back into the circle of care in the post-residential school era in Canada?” This is the question addressed by the National Collaborating Centre for Indigenous Health during a national gathering. The proceedings summary as well as the video documentary can be a good starting point for a reflective discussion with a group of fathers.

Note: There is also a French version of the proceedings summary (Résumé des séances) as well as a version of the video documentary with French subtitles.

The National Collaborating Centre for Aboriginal Health built a resource booklet for First Nations fathers in B.C., but it can be useful to share with fathers from other Nations in Canada. You can also use some of the tips to build your own series of workshops. Find the booklet here.

Ball, J. (2009). Fathering in the Shadows: Indigenous Fathers and Canada’s Colonial Legacies. The ANNALS of the American Academy of Political and Social Science, 624(1), 29–48.