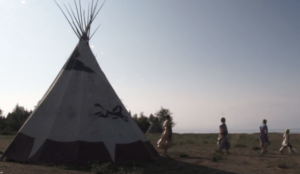 A strong endorsement of gender stereotypes is associated with higher school dropout rates, for boys as well as for girls. They can also have a negative impact on teenagers’ self-esteem, especially for those who don’t or can’t conform to those stereotypes. Dominant stereotypes associated with women are also often negative. Questioning these stereotypes with students and bringing them to restore traditional women’s roles in Mi’gmaq society can be a great first step in the path to equality.

This activity is based on the short film Mel ge’ gi’ nut Epit, produced in 2015 by Naomi Condo, from Gesgapegiag.

If they don’t list “strength” or “being strong” themselves, ask them to which gender this quality is usually associated.

Start by watching the film with the group: Mel ge’ gi’ nut Epit. Invite students to note their observations and feelings during the film.

As the film is intended to draw attention and awareness to the issue of missing and murdered indigenous women, the topic can be very sensitive. It is therefore recommended to use a talking circle for this activity.

Start a first round of talking circle so all students wanting to share their impressions and observations can do it.

Part 3: Analyzing the representations of women

The film title is “Strong Woman Song”. At the beginning of this activity, we saw that “strength” is usually associated with boys. Why do you think Naomi Condo associated this quality with women and girls? Think of all women and girls in your life: how are they strong? Do another round of talking circle to let the students answer your reflection questions.

At the beginning of the film, we see this quote from an anonymous male Sioux: “The honour of the people lies in the moccasin tracks of the women…” What does it mean to you?

What are the qualities, talents and attributes of women as they are portrayed in this film? How do you think these representations relate to traditional Mi’gmaq views of the role of women?

At the end of the film, an Amnesty International quote teaches us that “Indigenous women are going missing and being murdered at a much higher rate than other women in Canada”. The film is calling for justice for the missing and murdered indigenous women. In this final talking circle round, let students reflect on and answer these questions:

To go further with this activity, the students could be invited to produce a short film about a strong woman in their life, or a written or drawn portrait of a strong woman they know.