Gender Bias and Homophobia in Sports

Identify qualities that students associate with male and female indigenous athletes ;
Identify the attitudes students have about gender, sexual orientation, and athletics ;
Understand what stereotypes are and how they harm and limit people ;
Find positive images that show men and women that have qualities that students did not see as “positive” for each gender. 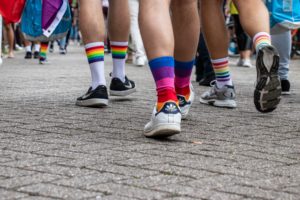 The world of sport and physical activity is strongly stereotypical and divided in function of gender. It is also a place where a lot of gender stereotypes are reproduced: “running/throwing/playing like a girl”, positive reinforcement of boys, link between masculinity and sport, etc. For students who are moving away from the stereotypes associated with their gender, physical education classes can be a place of bullying which is, most of the time, homophobic bullying. It is therefore very important to make sure we create a safe space for all children where they can liberate their potential in sport and physical activity, no matter what their gender is, through hands-on activities like this one.

The Teaching Tolerance website has put together a variety of classroom resources in many social justice domains and on multiple topics. The mission of this organization is “to help teachers and schools educate children and youth to be active participants in a diverse democracy” by providing them free resources. The Gender Bias and Homophobia in Sports activity discusses common characteristics and stereotypes that are associated with athletes. It has been adapted for the needs of this project, but you can find the original activity here.

Articles to learn more about the subject:

homophobia [ˌhōməˈfōbēə ] (noun) The irrational fear or antipathy toward LGBT people and homosexuality.

stereotypes [ ˈsterēəˌtīp; ˈsti(ə)r- ] (noun) A set of preconceived ideas or beliefs, usually negative, over-generalized to all or most members of a group based on their membership in that group. Stereotypes can be based on race or ethnicity, gender, sexual orientation, age, ability, physical appearance, class or socioeconomic status, occupation, etc.

1. Show some pictures of athletes:

2. Ask students: what words do you think of when you see the pictures? What words would you use to describe the athletes? Write the words down on a chart that looks like this:

5. A stereotype is an assumption made about an individual based on group membership. Look at the chart again. Which of the words on the chart are stereotypes about men and women, about First Nations people, and about athletes? How can you tell that they’re stereotypes? As a class, talk about how stereotypes can devalue and hurt people.

6. Try rethinking the stereotypes identified on the chart. On the Internet, tell students to find pictures of male and female athletes who have the all or most of the traits your class identified. Ask students to make a collage (either with printed picture or with a software) with the pictures. They can write the words from your class’s list on cards or pieces of paper. They should include them in the collage.

7. Share the collages. As a class, discuss what you learned about stereotypes of men and women as well as First Nations athletes. Students can also answer these questions in a journal.