Fostering an equal oral participation in the classroom

Encourage an equal oral participation in the classroom ;
Strengthen, in a culturally relevant way, students’ assertiveness and ability to speak in front of the class, especially for girls. 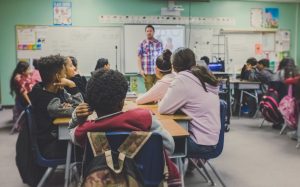 As they do for physical space, boys tend to occupy the sound space, to make an intervention without having been invited to do so before or to interrupt someone else to express their point of view (Canopé, 2018). It is therefore tempting for the adult in charge to give the floor to a boy repetitively and energetically asking for it, to avoid manifestations of frustration, instead of letting a girl patiently raising her hand say what she wants to say (Canopé, 2018). It is indeed what is happening: teachers have approximately 44% of their interactions with girls and 56% with boys. They question boys more often and for a longer time, answer more often to their spontaneous questions, give them more complex directions and, when they perform well at school, encourage them more and criticize them more (Mosconi, 2004).

These differences of treatment from teachers reinforce gender stereotypes linked to male and female social roles. Girls and boys can perform certain behaviours as boys or as girls, as if this existing situation was the result of “natural” differences (Canopé, 2018).

How can we avoid reinforcing gender stereotypes with our interactions with students? Equal treatment as well as a reminder of this principle can help us avoid unequal habits we might have unconsciously (Canopé, 2018). Here are a few tips and activities to make sure boys and girls enjoy the same opportunities to speak in class and the same attention from you.

The talking circle, an ancestral autochthonous communication technique, used in an academic context, can greatly foster an equal oral participation in the classroom, notably because of the ecosociety associated with it, which is inclusive and comprehends differences as complementary (Lathoud, 2016).

The traditional talking circle, as taught by the Atikamekw Elder Roger Echaquan, is described by Lathoud (2016, p. 14) as:

Traditionally, people form a circle, in a place they choose. The person who acts as a guide begins with a purification ceremony, a song, before introducing himself by talking about his origins, relationships as an integral part of one’s identity. The guide then gives to the host of the activity who, in turn, presents the theme of the gathering and passes a feather (or a talking stick or any other object) to his left-hand neighbour. Each speaks in turn (or chooses to remain silent) when given the feather, talking stick or any other object. Participants listen without judging, according to the ethic of non-interference. It is then more comfortable to express oneself without fear of being interrupted or contradicted, which promotes freedom to BE of each person. Individual experiences are shared in the form of life stories, which allow understanding the complexity of reality and of human beings as well as the interdependence between emotional, physical, spiritual or mental dimensions. We talk using the “I” criterion of truth in Aboriginal epistemology which involves taking responsibility for one’s actions, thoughts, emotions, and learning.

The researcher has developed a conceptual map that shows the applications and benefits of the talking circle when used in the classroom (Lathoud, 2016, p. 15). In yellow are proposed examples of talking circle themes that can be used in an educational setting. In purple, the anticipated benefits in a traditional Aboriginal perspective are presented. Finally, the green bubbles indicate possible academic expectations.

The main limitations to the use of this practice in class and identified par Lathoud are the need to follow a schedule, the number of students per class (younger students often lack the patience to listen to more than 15 stories), the space available in the room, the obligation to attend (but not necessarily to talk) clashes with the traditional practice of the talking circle, which you cannot impose, and the challenge of respecting indigenous cultures by avoiding to compromise too much on traditional practice to adjust it to the school system. In a nutshell, the use of this practice requires to think outside the academic framework “box” and to explore a new form of interaction with students.

When looking at an equal oral participation, the talking circle teaches students to not interrupt someone who is talking and to respect this person. It allows girls to practise public speaking and boys to express their emotions, skills that they both underdeveloped because of their gendered socialization.

Lathoud, F. (2016). The role of the talking circle within the school system. Journal of Perseverance and Academic Achievement for First Peoples, 2, 14–17.