Although the socialisation of children becomes gender-differentiated well before their arrival at primary school, it does not stop there. On the contrary, it continues and even becomes more accentuated as children contend with an educational experience that differs depending on their gender (Gagnon, 1999). This section deals with the ways in which gendered socialisation modulates the characteristics of the children’s connection to learning.

First of all, gendered socialisation translates into in differentiated interactions with adults and peers. Adults, parents and educators, although they feel they do not act differently with children, change their behaviour depending on a child’s gender. This results in different learning and in different experiences for children. The older the children, the greater the influence their peers have on their behaviour.

These differentiated interactions lead children to develop learning styles and a relationship with school that differ according to gender. A thorough understanding of these differences makes it possible to see the consequences of differentiated socialisation and to start thinking about our own behaviours with children.

Before looking at the differentiated connection to school and learning of mi’gmaw boys and girls, let’s look at a few context points related to the connection of First Nations to school as an institution. First of all, it is worth repeating that for hundreds of years, among Indigenous peoples, “teachings have been passed on within the context of the family and the community. School has been implemented just over 50 years ago; First Nations’ educational tradition is then quite young and it clashed in many ways with their traditional lifestyle” (Commission de l’éducation, 2007, p. 10). The residential schools, implemented around 1900, as well as all the colonial system, negatively impacted indigenous peoples’ relationship with educational institutions (Santerre, 2015). We can then say that the connection to school of a majority of indigenous students and their parents, in addition to clashing with their culture (Brabant et al., 2015), is tainted with mistrust. Fortunately, Audy et Gauthier (2019) highlight that according to many researchers, young First Nations members’ connection to school and education is the theater of a profound change and is becoming a lot more positive, less reactive and resistant.

According to the Canadian Council on Learning (2007), learning from an indigenous perspective is holistic and experiential, it is a lifelong process rooted in Aboriginal languages and cultures, it is spiritually oriented, it is a communal activity, involving family, community and Elders and it is an integration of Aboriginal and Western knowledge.

It is also important to underline a few elements related to the perceptions of school perseverance and achievement among First Nations, even though it can vary from one Nation to another and from one person to another. If, in the european-inspired educational system, academic success is measured with grades, it is often the other way round in indigenous communities, where the survival of the culture and the language is equally important (Commission de l’éducation, 2007). For the Innu, for example, “academic success is defined by parents, students and teachers more in terms of perseverance and of capacity to put in enough efforts to get passing grades. The notion of perseverance then becomes an important dimension of academic success.” (Commission de l’éducation, 2007, p. 11). For the Inuit, ancient know-how that supports traditional lifestyles, such as knowing how to survive in tundra, is equally important (Commission de l’éducation, 2007). Within the Innu community of Mashteuiash, it is assumed that academic success is a collective responsibility and that it is by “taking into account all dimensions of the Human Being that we achieve good health, a pride feeling and academic success. The Pekuakamiulnuatsh have a global and holistic vision of the present time and the future, and they make sure to foster the spiritual, emotional, mental and physical fulfillment of everyone” (Girard et Vallet, 2015, p. 27). Consequently, when looking at the connection to learning of young mi’gmaw boys and girls, we have to put aside the accounting view of academic success to adopt an holistic approach (St-Amant, 2003).

In that sense, the First Nations Holistic Lifelong Learning Model of the Canadian Council on Learning (2009) is a good example of how the connection to learning of many First Nations members isn’t limited to the educational institution itself, but has to be rooted in the community, to touch on many dimensions of the individual and the society, and has to be formal at certain moments, such as during the elementary schooling process, and informal at other times, such as during early childhood. 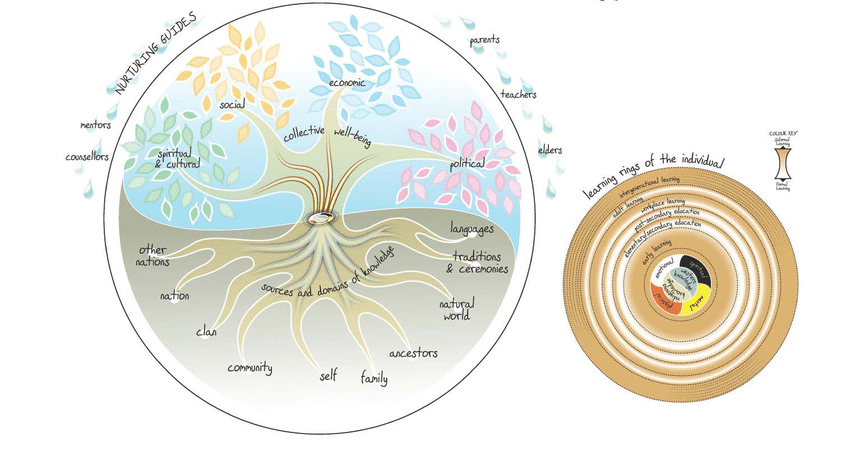 The following observations are drawn from various studies on the subject and represent observed trends mainly in non-indigenous contexts (Conseil du statut de la femme, 2016; Epiney, 2013; Gagnon, 1999; Secrétariat à la condition féminine, 2019), as very few studies have been done on this topic (Davison et al, 2004; Saint-Amant, 2003; Sylliboy, 2017). They are not absolute facts about boys and girls. Individual children adhere more or less markedly to the multiple stereotypes associated with their sex.

Canadian Council on Learning (2007). Redefining How Success is Measured in First Nations, Inuit and Métis Learning, Report on Learning in Canada 2007 (Ottawa: 2007). 47 pages.

Canadian Council on Learning (2009). The State of Aboriginal Learning in Canada: A Holistic Approach to Measuring Success, (Ottawa: 2009). 77 pages.