Emerging literacy in a gender and culture inclusive perspective 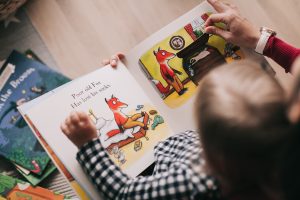 Boys’ difficulties in reading and writing skills are one factor that is linked to their school dropout rate, which is higher than girls’ (Boyer, 2009). Because of their socialization, and not naturally, boys fall behind in reading compared to girls and are less motivated to read (Lavoie, 2011). This gap is already visible among 5 year-old boys of Gespe’gewa’gi (DSPGÎM, 2017). To minimize it, we must develop, with boys and girls, an appreciation for reading starting in early childhood and break down stereotypes stating that reading is an essentially female activity. Yet, a lot of books showcase very stereotypical stories and characters that reinforce these beliefs. A well-picked book, both from the point of view of tackling gender stereotypes and regarding its content, can help children develop a critical look as well as daily reading habits. Good reading skills as well as a low buy-in of gender stereotypes are effectively correlated with school success and retention, boys and girls alike (Réseau Réussite Montréal, 2018).

Children’s books carry along many gender, colonial and racial stereotypes. It is, among others, through these stories and the representations of men and women they offer that children build their own gender and cultural identity (SCF, 2018). In order to limit young children’s buy-in of gender, colonial and racial stereotypes, it is important to offer them books that break down those stereotypes instead of reinforcing them.

To guide you through your choice of books that are free of gender stereotypes, you can use one of the two assessment grids proposed in the documents section below. It holds a few questions to ask yourself when you look at characters, illustrations and roles represented in a book. This great blog post can also help you assess books you already have or that you are planning to purchase.

Here are a few suggestions of books encouraging children to have a gender-equal representation of the world as well as Indigenous worldviews :

Finally, as reading is still considered today as a feminine activity and that, consequently, the literary offer is still very focused on female readers (and traditionally female interests), it is important to choose books that draw boys’ interests to hook them up with a subject they like, and then bring them to diversify their reading choices gradually. Choosing books showcasing animals and nature, fictional or not, is a good way to stay away from gender stereotypes. Here are a few examples:

You can also find, in the documents section below, a few educational activities to facilitate with your students after reading some of the books listed earlier.

Trying to deconstruct and uncover gender stereotypes in an early childhood educational setting doesn’t imply removing all books portraying stereotypical representations of boys and girls, nor does it require using only books of which the primary goal is to tackle gender stereotypes. It can be interesting, educational and helpful in terms of critical thinking to keep some of these books to read them with children and ask them questions about the story, such as: