Practice critical literacy skills around themes of gender identity and stereotypes ;
Develop a nuanced view of the potentially harmful nature of stereotypes ;
Begin developing an understanding of the socially constructed nature of gender, as well as some of its sources ;
Follow all steps of the writing process ;
See themselves as authors with the potential for standing up against detrimental gender stereotypes. 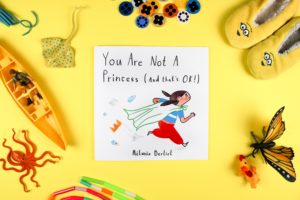 A strong endorsement of gender stereotypes is associated with higher school dropout rates, for boys as well as for girls. These stereotypes are widely shared through literature and stories, especially those targeted at children. It is therefore important to put specific activities on this topic in place (like this one!) to break down gender stereotypes with children.

The Teaching Tolerance website has put together a variety of classroom resources in many social justice domains and on multiple topics. The mission of this organization is “to help teachers and schools educate children and youth to be active participants in a diverse democracy” by providing them free resources. The lesson plan Exploring Gender Stereotypes in Stories “allows children to look at one or more picture books that counter gender stereotypes. After discussion of the book, children will engage in a creative writing activity geared to fostering individual identity and resisting social definitions of what and how a boy or girl “should” be.”. The activity has been adapted for the needs of this project, but you can find the original activity here.

gender (noun) refers to the social roles, behaviors and traits that a society may assign to men (masculine) or to women (feminine)

stereotype (noun) an overly simple picture or opinion of a person, group or thing

Gender stereotypes are very common in children’s literature. Classic children’s books and even more contemporary stories frequently portray boys and girls in terms of specific socially defined gender norms. In recent years, some children’s authors have made an effort to develop characters who exist as individuals, often in explicit defiance of stereotypes. This sort of literature can be helpful to students talking about any sort of difference, as well as to children who are beginning to understand the depth and harmful nature of gender stereotypes.

This lesson allows children to look at one or more picture books that counter gender stereotypes. After discussion of the book, children will engage in a creative writing activity geared to fostering individual identity and resisting social definitions of what and how a boy or girl “should” be.

Once they are done creating characters, partner students with classmates to write a story involving their two characters. Make sure their stories include a setting, a problem, at least three main events, and a solution or resolution. The stories may or may not explicitly deal with gender stereotypes. Once the stories are complete, allow students the opportunity to share them with their classmates.